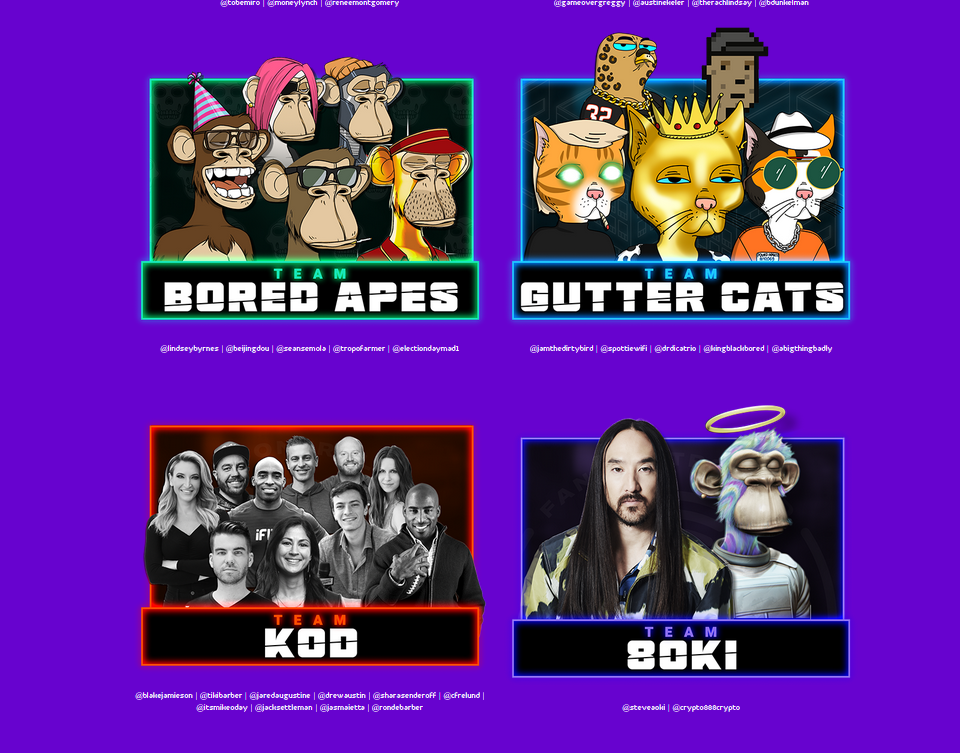 The FCF was founded in 2017 by Sohrob Farudi, Patrick Dees, Ray Austin and Grant Cohen and hosted its debut season inside a bubble environment in Atlanta amid the pandemic last year. The FCF features an indoor version of American football in a seven vs seven-player format, and the games are streamed live on Twitch.

The unique feature of the league is that the teams are governed by their fans, who have voting rights on anything ranging from player acquisitions, in-game plays, branding and team selection. For the upcoming season, NFTs will play a key role in the voting process for half of the teams.

The $40 million Series A funding round was led by NFT and crypto firms Animoca Brands and Delphi Digital. The funds will be used to expand the league from four to eight teams for the 2022 season, along with launching NFTs called “The Ballerz Collection.”

All four of the new teams are owned by figures tied to NFT projects with the Bored Apes and Gutter Cats teams being the latest to be announced following the unveiling of the Knights of Degen and Team 80KI (co-owned by DJ and NFT proponent Steve Aoki) in October.

The FCF is rolling out 8,888 Ballerz NFT avatars for each new team which fans can snap up to hodl and obtain voting rights for their team. The NFTs will differ in rarity and value, with the more expensive tokens offering greater benefits such as enhanced voting power, exclusive content and game tickets.

Any existing Bored Ape Yacht Club or Gutter Cat NFT hodlers will also receive a 50% discount on Ballerz NFT purchases if they buy tokens corresponding to those teams. The NFTs are slated to drop late this month, and the public minting cost per token will be 0.1776 Ether (ETH) or roughly $580.

“One of the most powerful things that tokenization does is release the energy of fans into tangible forms of value and meaning, we see this effect in NFTs and also social tokens.”

“Fan Controlled Football is an evolution where the game is in the hands of the fan from the get-go and introducing blockchain technology will give it deeper meaning and purpose for all the fans that are playing FCF,” he added.

In an interview with Forbes on Jan. 12, FCF co-founder Farudi stated that the organization is “experimenting” with its format and will continue to do so to find out what works best for the fans and the league.

“We don’t know exactly what’s going to work and what’s not going to work. But we don’t have a player’s union. We don’t have 30 owners around the table telling us no. We have one agenda. Our agenda is to be successful. We’re going to experiment to the nth degree to figure out what works and what fans love,” he said.