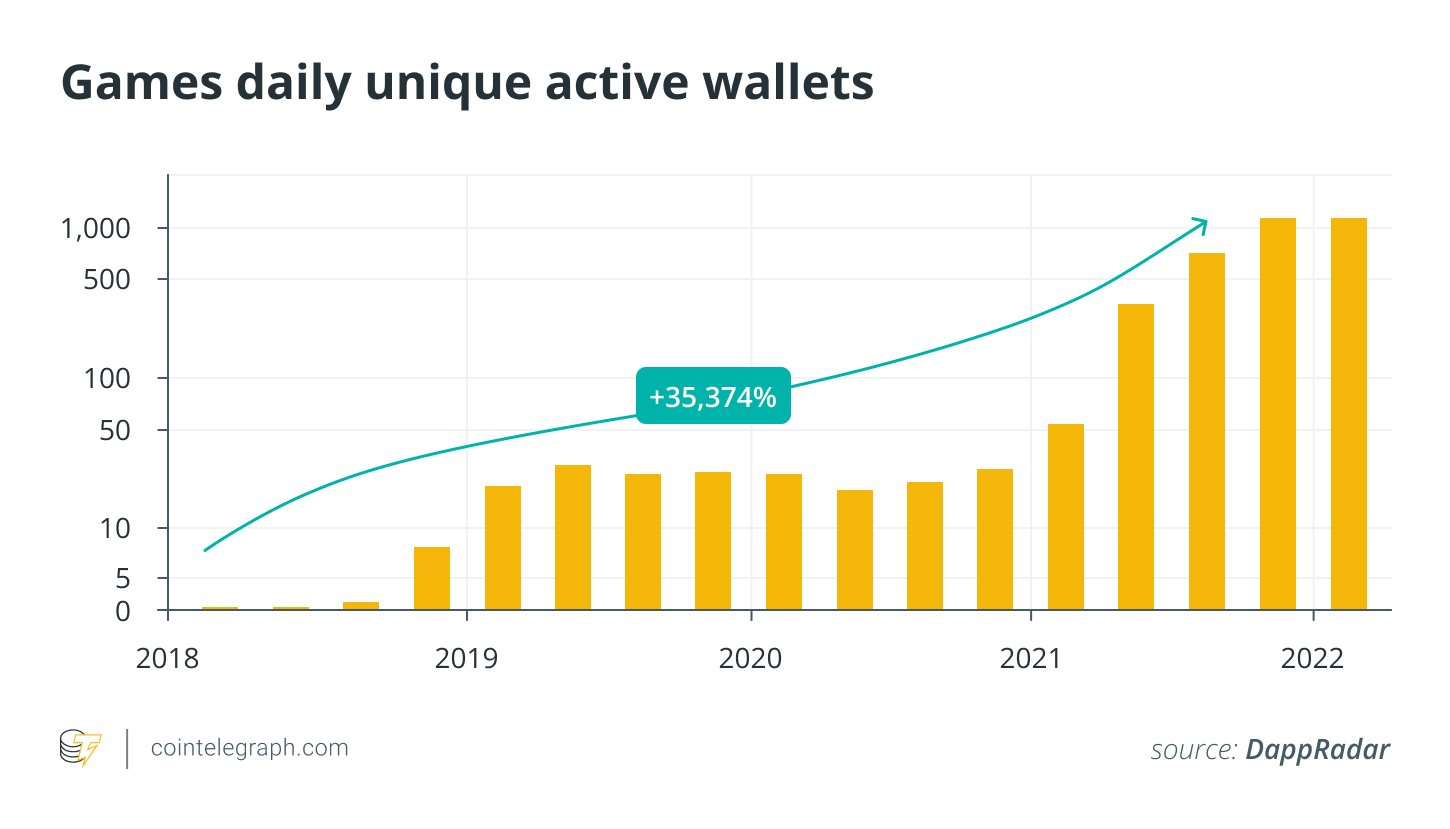 Blockchain games are set to overtake decentralized finance (DeFi) as the number one contributor to decentralized application (DApp) activity in terms of uniquely active wallets. A new 18-page report by DappRadar surveys the nascent ecosystem behind this rise.

Although still dwarfed by the traditional gaming industry, blockchain games, sometimes dubbed GameFi, have seen an early spurt of exponential growth, according to the report’s data.

“The evolution of blockchain games” report, which discusses play-to-earn (P2E) as a new paradigm for gaming, is available on the Cointelegraph Report Terminal to purchase. It details how the play-to-earn model gained traction in the COVID-19 pandemic when players from emerging economies were seeking new sources of income. In Q2 of 2021, which was notable for a quarter-over-quarter growth of 503%, Wax’s successful space mining game called Alien Worlds was one of the main profiters. Other key players in the space included Axie Infinity, Decentraland, Splinterland and Upland.

The report projects that although resistance from the traditional gaming industry and mainstream media are still considerable due to negative press coverage, an improving understanding of blockchain technology could assuage those concerns. The researchers argue that increased public awareness of comparatively energy-frugal proof-of-stake (PoS) technology and the possibility of robust ownership of in-game assets could make GameFi fit for the mainstream in the long run. They conclude that “the horizon for blockchain games is opening up quickly.”

DappRadar also breaks down the development of GameFi on different layer-1 ecosystems. Some games have grown large enough to sustain their own blockchains such as Axie Infinity with the Ronin blockchain, DeFi kingdoms with the Harmony Protocol or Splinterlands with Hive. Moving to dedicated chains may be a way for blockchain games to deal with scalability issues that still plague some projects.

For example, Polygon, which was developed as a layer-2 solution to deal with Ethereum’s notorious scaling problems, has not been entirely able to withstand the transaction volume generated by GameFi. At the start of this year, it suffered heavily under the agriculture game Sunflower Farmers and saw transaction fees spike to 500 Gwei. Although such technical teething problems will concern developers in the space for some time, the overall conclusions of the report are positive.

The accelerating influx of venture capital investments is one of the strong signs that the field is consolidating as an industry, the report argues. While only $70 million were raised by blockchain game companies in 2020, the sector attracted $4 billion in VC investment in 2021 and has already seen an influx of another $2 billion in the first quarter of 2022. With the rise of dedicated VC companies such as Hong Kong-based Animoca Brands, GameFi is likely to gather further momentum through dedicated infrastructure.

An assessment of the interplay between DeFi, NFTs and the Metaverse completes the comprehensive analysis. The increasing interoperability, decentralization and democratization of games made possible through the symbiosis of these technologies promise an exciting future. The full contents of the report can be viewed here.

This article is for information purposes only and represents neither investment advice nor an investment analysis or an invitation to buy or sell financial instruments. Specifically, the document does not serve as a substitute for individual investment or other advice.