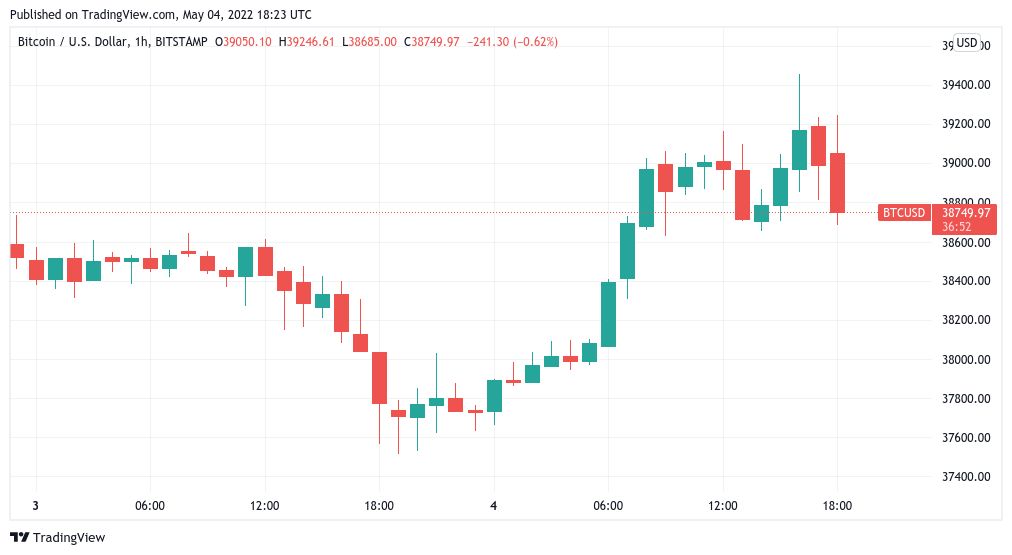 Bitcoin (BTC) stayed mostly steady at $39,000 on May 4 as the U.S. Federal Reserve conformed to expectations of a 0.5% key interest rate hike.

Data from Cointelegraph Markets Pro and TradingView showed BTC/USD exhibiting minimal fluctuation as the Fed confirmed what many assumed had already been “priced into” markets.

In contrast to previous remarks from the Federal Open Markets Committee (FOMC), the May 4 statement did not spark major volatility on crypto markets. The most that traders had to contend with was a brief spurt to just under $39,500.

At the time of writing, Bitcoin traded at similar levels throughout the day.

“With appropriate firming in the stance of monetary policy, the Committee expects inflation to return to its 2% objective and the labor market to remain strong,” the FOMC confirmed in an official statement.

“In support of these goals, the Committee decided to raise the target range for the federal funds rate to 3/4 to 1 percent and anticipates that ongoing increases in the target range will be appropriate. In addition, the Committee decided to begin reducing its holdings of Treasury securities and agency debt and agency mortgage-backed securities on June 1, as described in the Plans for Reducing the Size of the Federal Reserve’s Balance Sheet that were issued in conjunction with this statement.”

The scope for volatility to enter remained, however, as Fed chair Jerome Powell had yet to speak an hour after the statement’s release.

In anticipation of Powell’s comments, on-chain analytics resource Material Indicators argued that it still did not pay to be long BTC on shorter timeframes.

Giving the #BTC trend the benefit of all doubts here, but note that prior bull reversals had higher bid volume and depth then we have now. If you are long, you either need a looooong term view or a tight stop. Powell speaks in 30 mins. #MayThe4thBeWithYou https://t.co/VzE3V2kA8Q pic.twitter.com/sp1kqDRBrz

Stocks, with which crypto continues to exhibit considerable correlation, were in a buoyant mood amid an absence of surprise moves by the Fed.

“FED raising rates with 0.50%, but also starting the Quantitive Tightening from June 1st. Everything as expected, QT starts a bit later. The actual event was priced in already,” Cointelegraph contributor Michaël van de Poppe added in part of Twitter comments.

“Tighten until something breaks”

Others were less comfortable with the Fed’s path.

Analyzing the implications of the priced-in hike, economist Lyn Alden hinted that risks tended toward a new crisis-like moment when hikes would bring serious risks of their own.

All of this is subject to adjustment based on economic and financial conditions.

Tighten until something breaks, basically.

On the topic of inflation, meanwhile, Alden added that the world had the “biggest disconnect” in inflation levels versus central bank key rates since the time of World War Two.

The outlook for Bitcoin, as Cointelegraph reported, remains skewed to the downside before a recovery later on as stocks suffer from Fed tightening.