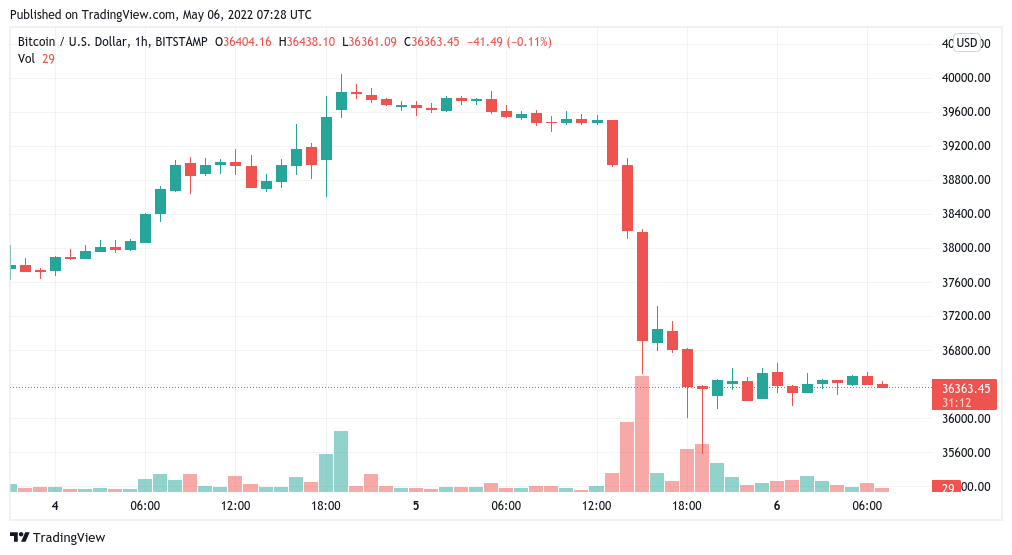 In a tweet on May 6, Cointelegraph contributor Michaël van de Poppe suggested that the BTC price was at least giving “serious signals.”

After plunging to 10-week lows in line with equities on the May 5 Wall Street trading session, Bitcoin bounced at levels last seen in February.

The downturn in both crypto and stocks, which followed an initial bounce the day prior on the back of expected rate hikes by the Federal Reserve, appeared to be more than traders bargained for.

The S&P 500 finished the day down 3.5%, while the Nasdaq 100 ended down 5%. Outside stocks, U.S. 10-year Treasury futures shed 1%, a rare combination which gave some market participants pause for thought.

Jason Goepfert, founder of Sundial Capital Research, noted that such a chain of events had only occurred twice in the past quarter century — during the 2008 Global Financial Crisis and the March 2020 COVID crash.

“Someone is blowing up, and this is forced liquidation,” he told Twitter followers.

Someone is blowing up, and this is forced liquidation.

As such, the chain reaction roping in Bitcoin could have been the capitulation event that many had previously said was necessary as a result of changing U.S. economic conditions.

“That smells like capitulation to me or at least some serious signals overall,” Van de Poppe commented.

He noted that the dip had also produced the highest-volume 4-hour candle since early December on BTC/USD. Volume, as Cointelegraph reported, was a key aspect which needed to return in order to produce a more convincing capitulation event.

Assessing the impact of the dip on hodlers, however, it appeared that a full market reset had not resulted from the day’s losses.

Liquidations remained fairly tame across cryptocurrencies, BTC accounting for $190 million over the 24 hours to the time of writing. This was the highest daily tally for several months, but did not surpass January’s cascade to $32,000.

“Regardless of what I ever say in the short-term, macro continues to be down,” popular trader Crypto Chase summarized about the outlook.

“There will be bounces, pops, squeezes, short-term euphoria, you name it.. but I don’t think we see macro reversal before major capitulation OR Fed backtracking stance on rate hikes/QT/balance reduction.”